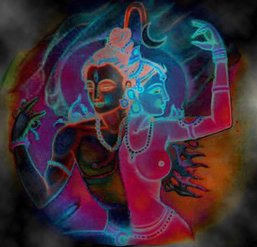 
They come down from Mt. Kailash. They teach us about what it means to be transgender in the true sense of the world. We are coming into a knowing about our sexuality which holds it up, high, as a sacred thing. It was never about lust. These beings are a bridge in our understanding. We are learning about feminine and masculine as states of being beyond the body and beyond gender. Here on earth reproduction depends on one specific type of union – that of male and female, the core archetypal polarity of duality. It is the thread that weaves the cloth of our experience. As we near the summit, or source as it were, we experiment and play with myriad possibilities. The more we bring lust and low vibrational hatred into the matter, the more animalistic and convoluted the results. Alternatively, when we center ourselves on what sex actually is we can survive the shock of such manifestations.
​
Love is of God. These beings of love, incarnating now, can playfully be seen as mystical beings… not unlike unicorns, dwarves, fairies and the like… for example. The key is still the key. Loving such beings will never “corrupt” the Truth. It is what it is. Homosexuality and related streams of experience point to a truth about feminine masculinity and masculine femininity which transcends the body. What if both existed in the same body? What if procreation was possible by other means, mental means? Did God not impregnate Mary? Did Auset not conceive Heru without the use of her husband’s phallus? These are our greatest mysteries and yet the sacred drama is spilling out in undeniable ways all over our mundane lives until we cannot ignore it… until we cannot pretend the Truth does not exist.
​
What is sex? Sex is union which manifests by means of intention. This is three dimensional here, in this realm. Just because you use a love machine for lust doesn’t change its purpose. Without the shadow of our cravings and psychoses, intercourse is a magical endeavor. Treat all beings as if they were magical, sent to express Divine love in their own variegated form. Be patient. Our truths are colliding. This is how we merge, becoming one expression of Divine joy at play.

We are to ask now, "What is the male part for?" and "What is the female part for?" There is a perceived split between heaven and earth, between God and creation. Mystic union assures us that the two can and will be joined... and in fact are already joined.
8/10/16

​
Homosexuality... of course. Androgyny... of course. We are dealing with the fluidity of gender. We are embracing both the manifest and the hidden gender within. What does it mean to be a female and at the same time empathize with and tactfully apply masculine qualities? This goes beyond sexuality. We must learn to stop limiting ourselves to this sphere. For a male to identify with and express feminine traits does not negate his masculinity, rather it strengthens it. Likewise for the female. There is function within the world, and there is function within the spiritual realm. We are here and there simultaneously. Here is there. We are learning to give and to receive in step with the music. The harmony of the spheres serenades the listening ear. Be what you are. Pursue your butterflies. Those who don't understand will one day be incited to chase their own enchantments.

Truth rewards those who are brave enough to be called mad during this pursuit.

And yet, Truth can reveal itself in a flash without any pursuit.... If we let it.