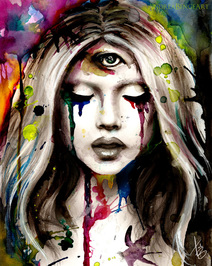 Andrea Benge Art - "Third Eye"
So long as we remain apart, there cannot be healing. In this time, the feminine is able to not only empathize with but also embody the masculine and vice versa. Masculinity is not synonymous with brutality, in spite of how some have experienced it. Such experiences were not of Truth, but of illness. Mental, spiritual, or emotional sickness causes a being to see itself as separate and to thus commit acts of abomination against another. Femininity can now forgive itself in its masculine aspect for ever perpetuating violence and mistrust. Masculinity can now safely don the nature of feminine receptivity, understanding the vast vulnerability it entails. We carry the memory and the scar. Whatever pain was inflicted was inflicted against oneself. 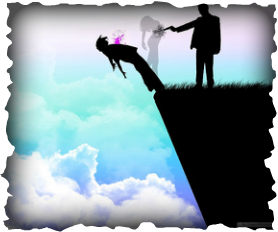 ​Fear is the reasoning behind violence. It is a rejection of vulnerability and possible victimization when one's walls are dropped. Fear of being open and exposed is what keeps us separate. To love another is to make oneself ​totally vulnerable. We are invited now to heal old wounds- to reach across divides of gender, race, and culture to be one with that "other." That "other" is oneself... a fragment, sometimes broken, sometimes strong beyond measure. We can applaud resilience as well as gentle changes of heart. It's happening now -- manifesting in overt ways which may confuse us as well as subtle ways in our relationships. Roles reverse. The first becomes last. God is to be found in both ends of the spectrum... and also sitting peacefully at the center where duality and its clashes of misperception become antiquated figments, a dream God had. We are awake now.

We are coming to understand duality and how "opposites" are meant to interact. One side--the feminine for illustration--can now express ideal "masculinity," knowing clearly what it is not... and vice versa. Gender is only partly about sexual/physical procreation. Gender is a manifestation of duality/polarity, the key to understanding this place. We are coming to understand that polarity exists as both macrocosm and microcosm... between beings and also within a being on an individual basis. When a female has matured spiritually, she can embrace a "submissive" nature with her consort as well as a more "dominant" leadership role. When a male has matured spiritually he is able to plug his feminine nature into the masculine nature of his female consort or the reverse. There is a learning on both sides. They can meet on both planes-- primary expression meeting primary expression (primary male to primary female) and they can switch effortlessly, allowing each to express the other point of polarity as is necessary. This isn't about lust or sex... it is about love and the discovery of what union is. It is a discovery of knowing when to give and when to receive, when to act and when to allow.

Our challenge is to reject the untruth of separation. When victimized, personally or ​inter-generationally,
we are to resist the instinctual reaction of believing in the false reality of the perpetrator. Darkness is contagious. We are to be light now. We are to be love now.