On Divine Duality, Gender and Culture

​The Ego Can't Be God
You can't KNOW where God is without first rising above your ugliness, your falsehood. We can't experience union with God until we climb the ladder from animalistic yearnings to full realization. The selfish ego cannot be of God. It must be left behind, hence the processes of religion. But religion too is left behind once union is attained. Everything the lower self clings to is left behind. You can neither love nature nor yourself more. You must love all, and thus transcend yourself and become exalted simultaneously... as you merge into God.

It is a process replete with great emotional energy. There is a tension. Look at the opposites of male and female for example. Great tension. The female urge is toward earth, nature, reproduction into flesh. Lovers of the feminine urge emphasize earthly magics, "deities" of earthly forces, gems and potions and enjoyment of physicality. And there are truths in this... but only in moderation and in firm connection to the masculine can these truths be wielded. The masculine urge is toward heaven, the mind, transcendence of the limitations of flesh. Lovers of the masculine urge emphasize warfare and destruction at worst because the urge is to transcend this place. They know it is temporary, a trap of pleasures. They too are right, there are also truths in this. But again, in moderation and in firm connection to the feminine can these truths be wielded appropriately. 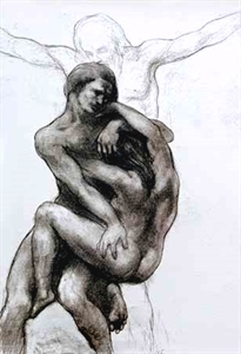 Gibran Gibran - "Etreinte"
Armistice
The power of male-female union is that it unlocks harmonious balance for both individuals and society as a whole. In union, earthy magics and "deities" lose control, prostrating before life's holy grail and its bearers. Those forces have power and are beneficial to one who has yet to attain union. The same is true of warfare and destruction. For one who has yet to attain union, destruction is an all-powerful solution. The obliteration of the "enemy," the genocide of entire peoples and species, etc. But in mystic union the force of destruction also loses control and yields to the power of the lovers who actually are the solution.

In male-female union both earthly magics and mental transcendence are acknowledged, affirmed and revered. One checks the other, allowing for healthy expression. This checking process begins in the home. One binds to the other and society reaps the harvest. This is the truth behind the mythologies and religious tales of fertile unions between male gods and maidens. It is the union of heaven and earth, of earthy fertility and heavenly transcendence. This too is the meaning behind garden apples and life giving ribs. Cautionary tales, all. Profoundly mystic and yet profoundly simple. Union is the key.

This tension is also evident in the clash of races. Take for example African Traditional Religions and their emphasis on ancestor reverence and the propitiation of various forces of nature. Africans habitually lean toward reverence of the feminine urge, historically granting great power and influence to the female in our societies. Now look at the result of this group coming into contact with the European ethos - industrial, enterprising, transcending of physical limitation at every opportunity. The European urge is less toward revering the physical and more toward domination of it. This is why we have been at war. We are at odds due to an apparently conflicting ethos. However, the key of mystic union shows us that only in union is peace attainable. Both urges are correct but can only be appropriately and beneficially applied through union.

Like females who don male behaviors and appearances, or males who transform into feminine guises, the African group learns what the European teaches and some ape their destructive expression. The European group learns what the African teaches and some ape their passive expression. Too much of one polarity leads to illness. As with the male and female, cultural union is key. There are roles to fulfill but there is also freedom. Within the safe confines of order exists the greatest joy of free play. This too begins in the home in how we encourage the fulfillment of purpose and also in how we talk about, behave with and welcome in members of "foreign" non-natal cultures which exemplify love and truth. Be like children, innocently open and unguarded. When you confront one who simply doesn't want to play the love game, let them pass... or find a way to tag them and make them chase you, laughing.

Love is our religion, it unifies and it heals. Love is our culture. A female is not giving anything of her femininity up when she joins with a male. She is instead accentuating and filling insufficiencies. She acknowledges and affirms what the male has to offer her. This process applies to all aspects of union, from the smallest scale to the largest, from marriage to social cohesion.

God is one. We are one. Together we can benefit from whatever gifts the "other" offers. As it is in the mystic union of male & female... revere each other for these gifts.

​
*Note: If the use of generalities and gender polarity talk is offensive, apologies, but... so it goes. 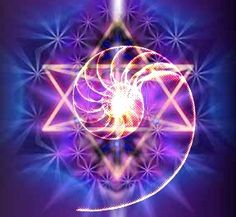