Are You Being Called? 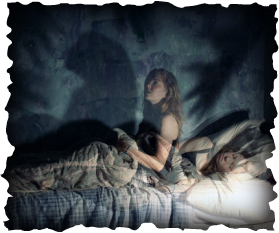 Many of us are suffering silently. Many of us are tormented in our sleep and when half asleep. Who do you tell about such deeply personal and haunting experiences? For years I kept silent about the frightening dreams and waking visions that plagued me. In my teens I suffered persistently. I can remember a time when I fell asleep in my mother's bed and woke up but couldn't move. I couldn't control my limbs. Even though I could hear myself calling out to my mother for help as she lie sleeping beside me - with my lips producing no audible sound, she couldn't hear me screaming. Over the years that followed, while sleeping in my bed I would fight to move at night. I practiced it. "Okay, shake yourself awake," I told myself whenever it happened again. That ability was thoroughly tested the night my tormentor revealed himself.

It began with a dream. I was running from someone and sought refuge in a church. I looked all around for a place to hide but I knew my pursuer held no respect for any "house of God." So, I kept running and on seeing a door, though blinded by the bright sunlight coming in from outside, I ran out only to find myself surrounded by identical embodiments of the man who was chasing me. He... they were each holding a shotgun, aiming it right at me. Knowing there was no escape I closed my eyes, fell to my knees and accepted defeat. And then the sound of shotguns firing. When I awoke, the man from the dream was sitting in the chair near my bed. I couldn't move. "Shake awake.. shake awake," I shouted in my mind. He stood up. "Shake awake." He stepped closer and closer. His eyes showed that he wanted to destroy me. Just as he got to my bedside I was able to finally shake myself out of it, it had become a mental jolting that overwhelmed my body to the point of movement. I sat up in bed, heart racing. He was gone. 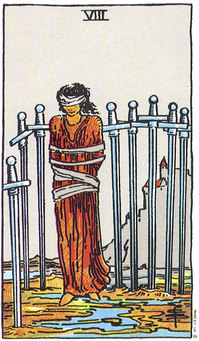 I didn't see that man again until years later when I stood in face to face combat with my abuser. We fought and argued constantly. On one occasion when his face was an inch away from mine the dream tormentor's grotesque face hovered over and merged with my boyfriend's face. It was him. In normal everyday life I didn't see it, but during this fight I could see that that entity was in him... using him. But this is not a neat story where after such a revelation the heroine leaves and is spared from harm.  No, in reality the torment of it was that I had to fight myself. After all it wasn't really "abuse;" he never actually "hit" me. It was my own understanding, my own spiritual growth, my own lack of faith which kept me from escaping. I was surrounded and, like in the dream, I had accepted defeat. A tarot reading I once did for guidance still lingers in my memory. I was martyring myself for an unjust cause... eight of swords.

For years I was in constant battle to manifest my purpose... to serve God. Our battles were often existential, that is how I began to see I was fighting no ordinary foe. This was something dark. This was something... someone who embodied hatred. There was no convincing this entity of any of the Truth I carried. Oneness, peace and love were antithetical to its very being. But some of that darkness had to be in me for there to be any attraction at all. I acquiesced to it. The hatred and untruth it held dear became my truth. However, all the while God kept sending me glimmers of guidance. He was calling me. Inspired by this guidance, I decided to "shake awake" and was slowly but increasingly able to hope again.

My sisters, what you are here to bring forth is a threat to disorder and disunion. When you are called to do Divine work, they will try to stop you. They will try to end you. They are loveless. It is your love and faith in Divine order which will lead to their undoing and God's triumph.

Suffering through such demonic miasma is a sign that you need to choose sides... ardently.  Those who are similarly attacked by unmistakable darkness, I pray you walk toward the Truth. What did I do to escape? I prayed, fasted and chanted. I stood naked and trembling in my shower repeating, "where are you?" over and over again to whatever Ultimate Power existed. I knew it was there; I knew I was meant for something more. My will to walk in the other direction had been broken... finally. All I wanted was Truth. And then... the male who was my vibrational match appeared and offered rescue.

How to Light Up the Darkness and Call Out 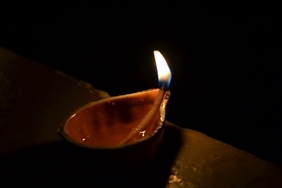 Vigil Lamp/Diya
Light an oil lamp or candle used only for this purpose and pray near it daily. Keep it lit, safely, whenever you are at home. Olive oil or ghee is recommended.


If you have heard the Creator's call, all that is required is simply to follow and fulfill your purpose.

* And thank you to the sister at Sykes who shared her experience with me, inspiring me to share my experience. The more Truth we tell, the more light can be spread. 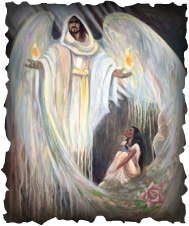 Be What You Are

If you don't know what you are here for, all you have to do is ask. Call it shamanic, call it Christian, call it Kemetic, call it enlightenment... call it what you will, it is simply acknowledging the revelation of your Divine purpose. Whether it is one single instance where you manage to save one person from drowning in the world sea simply because you were there, because you had the necessary empathy and understanding... or whether you are a high priest or priestess called to create sacred space or a teacher who impacts the lives of thousands... you have a purpose.

We go around and around in circles trying to figure out what that purpose is. Why did God create me? Why is this or that happening to me? Get all the nonsense out of the way and just be it. That is the calling. On the mystic path, the mystery lies in the revelation of key archetypes with techniques to employ for self-realization. Follow those breadcrumbs. If you dream of yourself doing a thing, do that thing in your waking life... so long as it harms no one. If you receive guidance from a loving source, follow it. In time you will be rid of your confusion and the false garments handed down to you from family and society.
​
Be what you are. Float in that bliss. Mother-Father God will stream love and light through your efforts to help us all. No fear. Only humilty and conviction of purpose. That's all...
6/2016