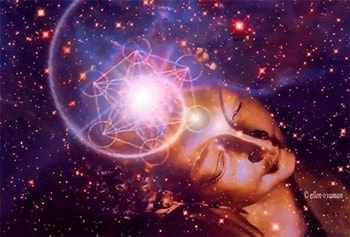 "What is the All? Simply the eye & forms, ear & sounds, nose & aromas, tongue & flavors, body & tactile sensations, intellect & ideas. This, monks, is called the All. Anyone who would say, 'Repudiating this All, I will describe another,' if questioned on what exactly might be the grounds for his statement, would be unable to explain, and furthermore, would be put to grief. Why? Because it lies beyond range."
​-Sabba Sutta
There is no separation between the senses and what is sensed. This is the meaning of "non-duality." The eyes and the forms perceived, the ears and the sounds heard, the tongue and that which it tastes, the skin and that which it touches, the nose and that which it smells... all of these are generated and controlled by the perceiver/experiencer--By one who knows The All. 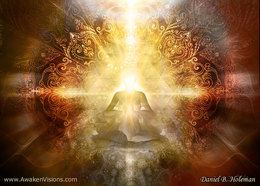 All that is perceived is the same as the one perceiving. We get what we desire because of this Truth of The All. A being, a perceiver, is the same as that which is perceived. This is the Truth behind the law of attraction. Reality is thus created at every turn. Reality is sustained or destroyed while sitting still. This is the effortless path. The experiencer awakens during the experience, realizing she or he is the one controlling--causing-- said experience. This is why it has been said that this is a dream world. This is why it has been said that Maya weaves a web of illusion. However, the womb of creation is a gift--to be played with according to desire, yearnings and aptitude for correction.

When one believes the creation to be more powerful than the creator, this is a falsehood and warrants correction. When one perceives the thread of falsehood running through one's life, one sends a ripple throughout the field of creation... desirous of cessation or re-creation. One destroys one's own illusions. The great fearsome weapons of Kali Ma and Sekhmet, the compassionate love of Christ, the transcendent wisdom of Mother Tara, the attractive qualities of Radha-Krishna, the power of Ma birthing Ra .... all of these, and more are tools of either sustaining, destroying or creating realities. In the mundane world we can create institutions, arts, those things which benefit others. In the sphere of spiritual life, one can use these tools--these Divine Truths-- to destroy ones illusions and create the ideal state.

Find the All. The All is all-of-that-which-one-perceives. All of this is your creation. When a creation no longer satisfies, one's vibration--one's frequency--changes, matching another aspect of creation. Our many religions and traditions have their various ways of pointing to this. They are not necessarily finalities but resting stops along the path. When the forms, the idols, the books, the penances, the practices have all done their part.. the mind clears. One can directly perceive The All. The practices, the forms etc begin to lose preeminence. The Self as doer comes to the fore.

​Everything you have ever experienced has led you to this moment. This is all you have ever wanted. Every other pursuit was just a diversion, a mistaken foray. Seek the Truth, be the Truth, speak the Truth and the Truth will manifest in its full glory. False truths can be moved beyond... and will be. They have been. This state is your true essence. You have always been attracted to this knowing.. you were always already at your destination. There are lineage practices, and then there are states of being attained even within one's lineage that have gone un-described... which are beyond practices. There is no process for this. This is why so many people tire of religion and find it dishonest. Because at the core, these practices are merely temporary tools, valuable to the devotee depending on respective stage of development. Different tools for different purposes and proficiencies.

One can move through all of these forms and practices. This can be done in "solitary" practice or with a living teacher. But even the "solitary" practitioner is never alone. The energy that surrounds Truth is vast, timeless and powerful to the degree that a palpable presence can be felt. The All is known by many seekers, and has been known for countless ages. Such as these are safe within this knowing. Their presence merges with it. Like a magnet, these presences/this All draws desirous devotees like a magnet draws iron or a flame draws a moth. It is the cessation of duality; the cessation of the false belief that you are separate from that.

Find the All. As was said by Buddha, when one claims to follow something other than the Truth of the All... that one is vexed for lack of ability to explain it. The Truth is experienced firsthand, and is "shamanic" in nature. Truths that take place beyond the sphere of one's own perception are not Truths at all. Creative power is found from this vantage point.. within not without. There can be no lacking here. This state is not dependent on the initiation or dogma of others. Yet it is free of egoic rust. Pristine perception of the All is possible once one has discarded one's various falsehoods. Teachers help in this process, at times we are in denial of what is rust.. about what lies we have accepted as absolute truth. Teachers help in this waking up. When a teacher does not come forth on the physical plane, one or many will come forth on subtler planes. Desire meets the desired, regardless of obstacle. This is the power of the Creator, the attraction of like unto like.

How would one find liberation if one is isolated--either by outside opposition or self-inflicted exile? How would the guru appear to one in an open marketplace if one does not venture to this or other places? Liberation is attainable in the very seat of experience regardless of location and regardless of access to living masters. Guru is internal before it is external. In fact, for some it may never manifest as a physically embodied teacher. The All itself is the teacher and those who have been drawn to it through the ages.. these will be the guru.. these will teach the way. These will promote the "un-learning" necessary to advance. These are the Self. The Self finds Truth, embodied as one particle of light at a time... and simultaneously all at once. The created merge with Creator. Duality is collapsed.

Find the All. This finding is exalted mystic union.

​
Thank you Ma, thank you to my guides who never let me falter.