​Path of the Water Bearers

(Scroll down for more on Water and Aauat Hathor) 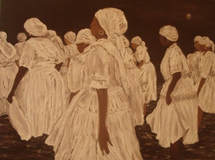 Artist: Danielle Charles
It has been a long road. After many years of questioning inner revelations, freeing myself from imbalanced relationships, watching my mother and father pass on, and filtering through religious symbolisms... I am happy to say that I am finally ready. The writings on this site are a sort of open journal, the unraveling of my thought process as I weighed my personal transmissions/symbols against socially accepted religious archetypes--across cultures.

After years of waiting to be initiated by priestesses who charge thousands of dollars, I have come to accept that Divine Spirit has already sanctioned me for this work. Any physical initiations would simply help with ritual aspects and officially join my ancestral spirits to my body.

Within the dream realm, Spirit revealed my path as High Priestess, initiated me with multiple mantras, and revealed the nature of my work. There have been guides, gurus, totems and direct knowing. Accepting this call mirrors the nature of my work: To initiate others into the path of inner revelation, I had to first accept the validity of my own personal gnosis. Similar for you, yes?

This path is shamanic in nature. For each woman, intuitive symbolism may be pulled from seemingly disparate cultural traditions. It is our task to make sense of these symbols, these memories, these knowings. Intuition goes beyond reason and logic. It is a knowing that takes place on a level higher than any crass ego can touch. The personal work, for each of us, is to slough away our egoic and karmic stains so that we can perceive divine truth with clarity... then manifest it. 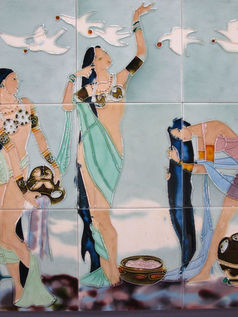 ​What I offer now is sisterhood on the path of inner-revelation and manifestation of highest truth. It is an initiation, a beginning. After opening to divine guidance, learning to still any false thoughts, accepting the validity of that which needs to come forth... the Water Bearers will fill this earth with all good things.

​​We gather together to go to the waters for cleansing, for healing, for heightened intuition, and for empowerment.


Contact me for upcoming events:
Submit request to gather

Water: A Linguistic and Historical Pointing 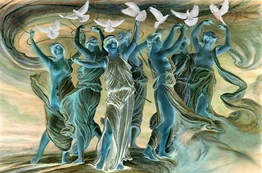 ​When Christ was baptized in the Mother's waters, the holy dove descended...

The dove relates to the 7 Mothers/7 Sisters. See Dodona, Delphi, Mamissi Temples of Egypt. These places were renowned for the female powers of prophesy, manifestation/birth and the passing of wisdom.

"Miriam" who found Noah on the Nile and rescued him, relates to "Meri" of Egyptian origin. Meri denotes Lady of the Waters. The prefix mer- denotes sea as in mermaid. Mary Magdalene and Mother Mary share the same orientation--as water bearers.
​
(Note also, the ancient Egyptian word for pyramid was mer-- written as"mr")

Olomi of West African tradition, is "the owner of the waters." She spans a monumental height and sits upon her throne above the waters (personal revelation). Oshun and Yemaya are often referred to with this epithet.

Originally, in the Nile Valley Civilization of Kemet (now known as Egypt) Uati was the word used for the Mother of All.

Uati (Buto-Uati) was the predynastic serpent goddess, also known as Uachet/Wadjet. Uachet is within us as DNA and the power of spiritual awakening (aka kundalini). When an initiate raises Uachet to the crown of the head, he or she is enlightened. Or, when an initiate is empowered by Uati directly, she or he is enlightened. All pharonic kings wore the uraeus of Uati as a crown on their heads, to denote worthiness and empowerment by the mother goddess.

The serpent power was known as Arat Sekhem (Serpent of Spiritual Power). Combining Arat and Uati... Arawat is the original name of God in the Bible, see the Book of Enoch which was removed.

Satya Arawat/Aauat (personal revelation).
​
Saraswati, Mami Wata, Harahvatī Aradevi Anahita are goddesses who denote "water."
​
In ancient times, the "Wa" sound was written with a "v" due to an inability to write a "u" on stone; "w" is literally ​a "double u." This doubling of the "u" was to emphasize that the "u" sound was being denoted in that particular word. So Uati at times became Vati or Wati/Wata. It is the same Goddess/Truth.

Water relates to birth, dream, purity, cleansing, nourishing and life sustaining. Approximately 60% of our bodies are composed of water, and 71% off this earth is composed of water. In various traditions, water is considered a mirror or a portal to other dimensions of consciousness.

In analysing the mantra AUM in Sanskrit the sound of Uat can be understood to have the following meaning:

U denotes the dream state
A denotes the physical reality
T in kemetic, denotes that which is, that which abides
​ (the names of feminine deities often end in "t" i.e. Mehurt, Nut, Nunet, Auset, etc)

AUM Represents the movement of consciousness thru these states and beyond, to the stillness of pure being. Physical -> Dream -> Causal Deep Sleep. The silence after denotes the power latent supra-cosmic womb of creation.

The sound "N" in Kemetic medu neter (hieroglyphs) denotes water. The water heiroglyph for "N" is the historical origin of the letter "M"  {https://en.wikipedia.org/wiki/N-water_ripple_(n_hieroglyph) } 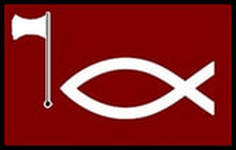 Personal Revelation
Often represented by white fabric on a pole, the word NTR (aka Neter or Netcher) is the Kemetic equivalent to the word "god." The "N" in netcher denotes vibration. "T" denotes that which abides. "R" denotes the mouth, or bringing forth. Everything in creation vibrates on a certain frequency. We change our experience by shifting vibrations. We know and merge with "god" through frequency. We bring forth based on the frequency we maintain. When we allow that frequency to grow dull and slow, we descend into experiences of greater density and powerlessness, in forgetfulness of our true nature (ntr).

The bija mantra of the Mother (not given here) represents the deep, unified state of consciousness where we go beyond both waking and dream states. This is the realm of the causal body. From here one can manifest powerfully based on attunement to causal truth. From this place we call forth the dove.. we call forth the "holy spirit," peace and wisdom of the Creative Source and the 7 Mothers/7 Sisters. In the waters we call forth truth to manifest in this three dimensional realm and beyond.


Sabean Spirituality is said to be the fore-bearer of Christianity. John the Baptist, till this day, is considered the preminent force for Sabeans/Mandeans. Water baptism is the central practice for a Sabean. These are not a relic people, but are alive and well (personal revelation).


Beyond dogma, beyond religious borders it is our collective birthright to reclaim this core spiritual truth.
​
We reestablish now the tenet of water baptism, with the acknowledgment of women's "ownership" of the waters. Birthing and baptizing the child, is a woman's birthright.

Reestablishing female authority over "the waters" ensures not only our survival, but ensures that we thrive based on a balanced, harmonic relationship between female and male. She brings male or female offspring forth in order to address a certain need of the people. Taking this child to the waters, she baptizes his or her head, empowering that child with her highest intentions. This is the first initiation. The priestess path of water healing and initiation is open to all who come sincerely, regardless of lineage or learned orthodoxy.
There is nothing to learn here. There is much un-learning. Much of this skin is to be shed... 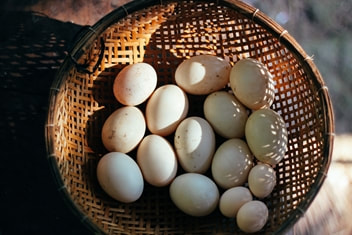